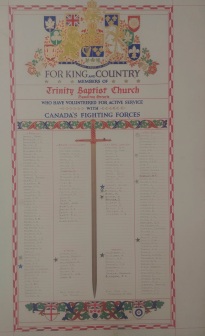 The cost of the long and torturous war was atrocious. Never before had there been a bloodbath like the First World War. The overall cost of human life was staggering: over eight million dead and twenty-one million wounded, out of sixty-five million mobilized.1 Those overall numbers do not include the genocide of over one-million Armenians at the hands of the Ottoman Turks or the tens of millions who died in the post-war Spanish Influenza. Canada eventually sent close to 620,000 troops (roughly 8 percent of the population) and experienced 60,000 dead and 173,000 injured.

Such sacrifices needed to be remembered, and remembered they were through a massive post-war building project of memorials and cenotaphs (over 100,000 in the UK alone), posting of remembrance rolls, as well in church and public services on 11 November. This year marks the centenary of what we today call Remembrance Day,2 and it is a good time to be reminded that the “church learned a lesson” from its First World War (1914–1918) experience.

The printing of “A Creed for Believers in a Warless World” in a Baptist paper was indicative of the winds of change in the early 1920s.4 That ten-point creed calling for a warless world summarized the beliefs of a growing number within the church who were distressed by the war’s failure to live up to its promises. Canadian Baptists were not unique in this trend to pacifism, however, for increasingly nations scarred by the war were marked by widespread movements for peace and outright abolition of war. In the spirit of bestselling anti-war novels like All Quiet on the Western Front (1929), one Baptist wrote what was on many people’s minds:

No, there are some of us to whom any course but an out and out repudiation of the whole war system is but weak compromise that only plays into the hands of our militarists and warlords. Call us dreamers, idealists, weaklings, pacifists, what you will, we are through with war. What the future holds in store we know not, but to-day in faith we take our stand with Him whose sword was love and whose whole defense was truth. He was a martyred failure to His day and people, but to-day He looks back in living pity over the dead ruins of the empires of the past. Centuries hence, long after our massive military organizations have destroyed themselves His truth will stand.5

Echoing the Kellogg Peace Treaty, the call increasingly was for war to be made illegal.6

For much of the late 1920s and most of the 1930s the clarion call was for peace. Even various Baptist conventions across Canada made resolutions espousing some form of pacifism. 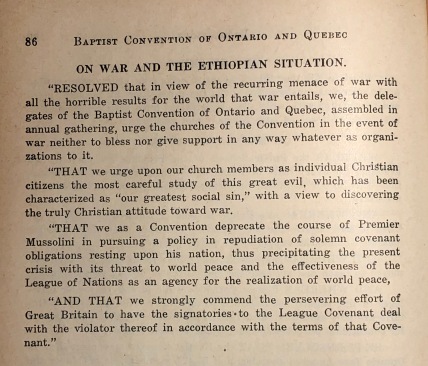 Then Hitler invaded Poland in September 1939, and Baptist pacifism went up in smoke as Warsaw burned. Canadian Baptists dropped their flirting with pacifism, and supported the war effort.

But this time it was different. While Baptists were once again supportive of the war effort, there was a marked difference. The mindless jingoism, dehumanizing rhetoric, discourse of holy war, blind trust of government, desire to punish, and active recruitment from the pulpit that had marked the Baptist responses to the First World War were conspicuously absent in the Second World War. Those had been winnowed from their response—not perfectly of course, but the surging pacifism of the interwar years had born fruit by teaching the churches important lessons from its support for the war against the Kaiser.

The Baptist responses to subsequent wars (Korean, Afghanistan) were also noticeably different. Baptists in general remained within the just war tradition, but it was a sobered just war position that had learned important lessons from the horrors of the First World War and the excesses of the churches’ responses to the conflict. One hundred years later, let us hope that Remembrance Day once again reminds the churches of the lessons learned.

Gordon L. Heath, PhD, is Professor of Christian History, holds the Centenary Chair in World Christianity, and is Director of the Canadian Baptist Archives, all at McMaster Divinity College, Hamilton, ON. He is also Secretary of the CBHS.